Yesterday, one of the most influential men to the Christian faith went home to be with the Lord.  You might live under a rock if you didn’t hear the news of Billy Graham’s passing.  Social media was filled with his quotes yesterday, which to be honest, was a nice change of pace from the usual.  There’s no doubt that Mr. Graham heard the words, “Well done My good and faithful servant” as he entered the presence of his Savior yesterday. 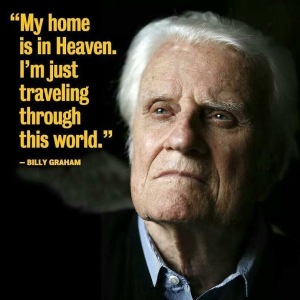 My mom, too, heard those words about five and a half years ago, and while the calling the Lord had on her life looked much different than Billy Graham’s, she still finished her race well.

Those words kept running through my mind yesterday, “Well done My good and faithful servant”.  To know that we Christ followers will have the opportunity to hear those words at the end of our lives is absolutely humbling.  But in the mean time, from now until we hear those words, we must fight the good fight, finish the race, and keep the faith (2 Timothy 4:7).  We must faithfully live out the calling that God has on our lives.

You see, I think that social media has planted in us a thought that if it can’t be seen by the world, then it isn’t worth doing.  And that could be the farthest thing from the truth.  Because God sometimes calls us to do things in the secret.  There are probably so many unseen things that Billy Graham did in his life that he would probably tell you were just as “big” for God as his crusades were.  Some days, our faithful service to the Lord will be unseen by most.  Faithful service to the Lord will look like cooking a chicken pot pie for your family, speaking a kind word to a friend, or sharing your notes with a sick classmate.  And friends, that’s a beautiful thing.  Because we have to remember, we don’t serve to receive applause from the world.  We serve because Jesus first served us with His death on the cross.  And as tough as it can be at times to feel unseen, we have to remember that we serve the Audience of One, the God who sees.

When you became a Christian, the Spirit equipped you with unique gifts.  You have something unique that you can bring to the Church, and as we’re told in Scripture, the pinky toe is just as important as the arm when it comes to the Body of Christ (1 Corinthians 12:12-30).  The Lord equipped Billy Graham to speak the Gospel to millions.  He equipped my mom to speak the Gospel to teenagers every Sunday.  Both were important to the Kingdom.  What has He equipped you to do?  Let’s stop comparing our calling to someone else’s.  Let’s put off the lie that we should only do things for God if they can be seen by the world.  Let’s just simply start loving our neighbor, right where God has us. 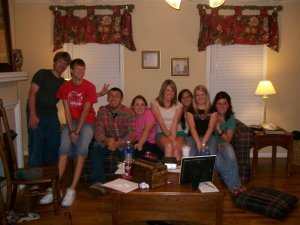 May it be that when our days are over we, like Paul, can say, “I have fought the good fight, I have finished the race, I have kept the faith” (2 Timothy 4:7, ESV).

View all posts by cassiepattillo